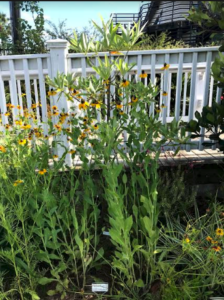 In late 2017, the newly formed Natives Project under Louisiana Master Gardeners was asked to help with the devastating after-effects of Tropical Storm Cindy. Gulf waters breached the bulkheads and destroyed the gardens at the post-Katrina rebuild of the Canal Basin Lighthouse on Lake Pontchartrain. Over the next three years, volunteers rebuilt the beds and installed hundreds of stormwater plants, grown by Master Gardeners and local native plants nurserymen. 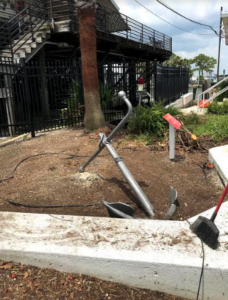 In 2019, the "Anchor Garden" was cleared, taking out the exotic plants that were overgrown and overstaying their welcome. A bioswale and rain garden were created in the areas contained by the old existing bulkheads. Frog fruit, LA Iris, Ironweed, Mallows, Turk’s Cap, Rudbeckia, Goldenrod, Bluestem Grasses, and Inland Sea Oats were planted. 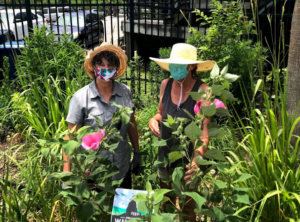 In 2020, another late-season storm demolished many of the plants by washing them over the banks of the grounds, and soil was badly eroded on one side. But in the Anchor Garden, the term anchor took on a whole new meaning. Called the Anchor Garden because of a large ship's anchor, the soil was protected by the deep anchoring roots of the native plants.

The Lighthouse is a venue for weddings and social events, to help underwrite the expenses of marine education. The Lake Pontchartrain Basin Foundation, now the Pontchartrain Conservancy, was one of NPI’s first partners and where NPI held its very first membership meeting. Now Master Gardeners and NPI members can visit the Lighthouse, help out in the gardens, and enjoy the colorful Gaillardia, Penstemons, Coneflowers, Mallows, Rudbeckias, Goldenrods, dwarf palmettos and much more, as well as Lake Pontchartrain.